Logitech F710 – Like the modern controllers used by current consoles, the Logitech F710 features four action buttons, one 8-way d-pad, two analog sticks that can also function as clickable buttons, two shoulder buttons, two shoulder triggers, and each one button for Home, Back, and Start. In addition, Logitech added two other switches in the middle, near the Home, Back, and Start positions, one for the mode selector and vibration control, respectively.

A switch to adjust the interface modes of the F710 is located on the side between the two gamepad shoulders. The button allows users to switch between Xinput and DirectInput interfaces quickly.

Logitech F710 – On the backside of the F710, there is a place to install 2 AA batteries that function as a power source for the Logitech gamepad. In addition, a hole near the battery compartment can be used as a place to place the USB-based receiver unit that is used to connect the gamepad to the computer.

To test the Logitech F710 when used to play various game genres, we tried to play some of our favorite games from the action, fighting, shooter, sports, and racing genres. During the test, we used the Xinput interface, which is compatible with the Xbox 360 controller driver on our computer.

As representatives of the action genre, we tried to play LEGO Batman 2: DC Super Heroes and Assassin’s Creed: Revelations. Both games can be played quite comfortably using the F710 gamepad. The response of movements and actions carried out by pressing the action button offered by the F710 is sufficient to play these games. 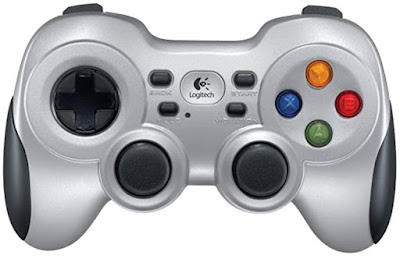 All brand names, trademarks, images used on this website [reviewboxs.com] are for reference only, and they are the property of their respective owners.